My, What a Big Beer You Have

The great thing about beer is its versatility. Beer can go high or low; we can gather ’round a six-pack, or something special brought up from the cellar; we can knock it back in a tallboy, or savor it in a snifter. But often, beer drinking falls back on plebian vulgarities, on pints pounded, on bongs and shotguns. Its tradition is grander: Think of the Egyptians who offered saffron-and-date beer to their pharaohs and gods, or the 18th-century English lords who brewed barleywine to mark a first son’s birth, and opened it when he turned 18. 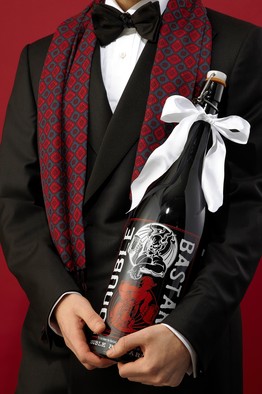 This season is the best time to try these celebratory beers.

Beer, in other words, was once a drink of celebration. More recently, however, those laurels have fallen on wine alone, as a dinner party offering or holiday toast. But that’s finally changing. Brewers have lately been courting the class (and cash) of the wine world with bigger bottles, heftier price tags, claims of terroir, even—or, at least—profound, boastful flavors. This new generation of beer demands a different kind of drinking: Raise a glass, and drain it slowly.

This season is the best time to try these celebratory beers. There’s their fizz, of course, to punctuate your holiday with exclamation marks of popping corks (or hissing caps). There’s their size—big bottles with more joy to spread, 750 milliliters and up (and up)—and their strength as well. These single-bottle beers are often more potent than their by-the-case brethren, meant to be savored, not slugged—warming and spirited, drinkable hearths.

There are explicitly holiday-themed beers, of course: festively labeled and flavored with an often secret blend of seasonal spices like nutmeg and clove. Think beer, mulled. These are always popular. Anchor started bottling its Christmas Ale in magnums in 1991 when it released 101 1,500-mililiter bottles; the following year it made almost 2,000.

A few beers are brewed, like Champagne, with the méthode champenoise, a convoluted process in which beer is fermented a second time, in the bottle, then carefully strained of its yeasty sediment, topped off with fresh beer and corked tight, producing an extra fizzy (and often extra-strong) tipple. (Once a rare, Belgian variety, these so-called bières de Champagne are catching on stateside, made even by big-name brewers like Sam Adams’s Boston Beer Company.)

If all of this is a turnoff, if you prefer your celebratory toasts unpretentious and filled right to the brim, don’t worry. The beers gathered here are festive in their own right—sized for sharing, spiced and strong, corked and foil-wrapped—but they are still beer. Their brewing methods may be complicated and their spice mixtures elusive and beguiling, but one needn’t dwell on that. Enjoyable is the word. Champagne is a place; celebration is a state of mind.

We look forward to receiving your questions and comments and we will reply to your email promptly.